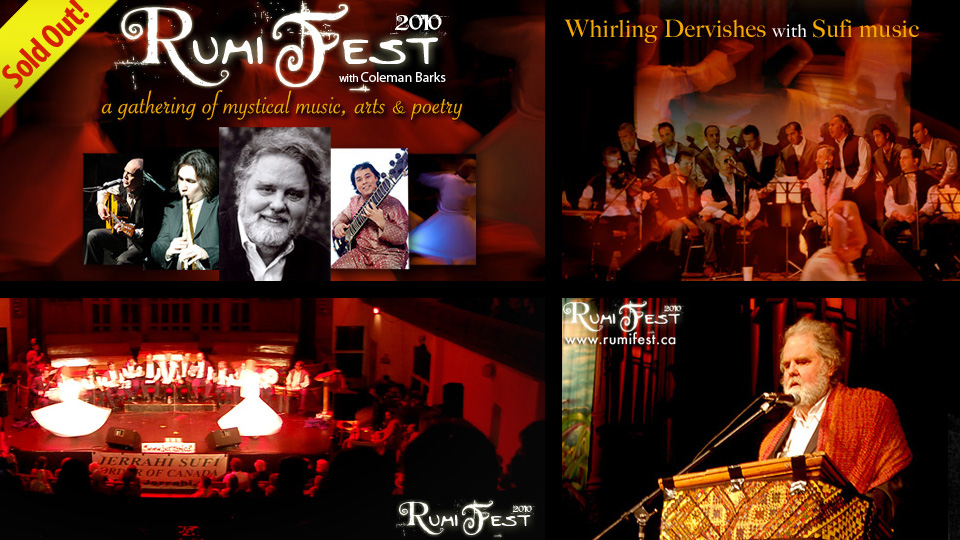 RUMI FEST was a sold out event held on October 2010. Day 1 featured performances by: Coleman Barks, Whirling Dervishes with Sufi Music, from the Canadian Sufi Cultural Center, Garo & Friends and a special guest performance on Sitar by Irshad Khan, the sitar maestro. It also featured an art exhibit by: The Open Easel revolving around Rumi's work.

*Partial proceeds from the Rumi Fest were given to Dr. Edhi of Edhi Foundation and the other half were given to the new hospital in Pakistan built by Turkey.

Mevlana Jalalud'din Rumi was born in 1207 to a long line of Islamic theologians and lawyers on the eastern edge of the Persian Empire in what is now Afghanistan. In order to escape the invading Mongol armies of Genghis Khan, his family moved west to a town now found in Turkey, where he eventually became scholar and a teacher. It was a blessed day in 1244 when he met Shams Tabriz, a passionate mystic with rare gifts and insight. The renowned scholar Rumi had found a soul mate and friend, Shams Tabriz, who would become his spiritual mentor.

Due to their friendship, Rumi wrote thousands of lyric poems and short quatrains in honor of his friend Shams Tabriz. They are poems of divine epiphany, spiritual awakening, friendship, and love.

Rumi wrote over 25,000 verses of inspiring and devotional poetry in the Masnavi, encapsulating the Sufi’s experience of union with the divine. These timeless classics have enjoyed a renaissance in recent years, as Rumi has become one of the most popular poets in the world. His poetry is wide ranging and encompasses many different ideas but behind all the poetry the essential theme was the longing and searching for the union with the divine. Rumi was himself a great saint and a mystic. His outpourings of poetry were a reflection of his own inner consciousness. It is claimed that over the last fifteen years Rumi has been the most-read poet in the United States.

Born in 1937 in Chattanooga, Tennessee and educated at the Univ. of North Carolina (BA 1959; PhD 1968) and at the Univ. of California, Berkeley (MA 1961), Coleman Barks has since 1977 collaborated with various scholars of the Persian language (most notably, John Moyne) to bring over into American free verse the poetry of the 13th Century mystic, Jelaluddin Rumi. This work has resulted in twenty-one volumes, including the bestselling Essential Rumi in 1995, two appearances on Bill Moyers’ PBS specials, and inclusion in the prestigious Norton Anthology of World Masterpieces. The Rumi translations have sold over a million copies.

Dr. Barks taught American Literature and Creative Writing at various universities for thirty-four years, and has published seven volumes of his own poetry. The Univ. of Georgia Press published WINTER SKY: Poems 1968 -2008in September of 2008. In 2004 he received the Juliet Hollister Award for his work in the interfaith area. In 2009 he was inducted into the Georgia Writers Hall of Fame.

Originating among the Turkish Sufis, the practice of Sufi whirling (sema) is a devotional meditative dance that has been passed down to devotees of the Mevlevi order for centuries.

The Jerrahi Sufi Order of Canada strives to promote peace, understanding and unity across diverse world views through sharing and appreciation of sacred knowledge and the arts. It is a worldwide, cultural, educational and social relief organization that preserves and advances the customs and spirit of traditional Sufi tenets in Canada.

Irshad Khan is considered among the world's best Sitar players and the leading Surbahar (BassSitar) player of his generation and among the finest instrumentalists of the world. His individual stamp in both these instruments ascends from the distinctiveness of his technique and mental prowess is renowned not only for his mastery of these two instruments, but for his unique presentation of the different genres of Indian classical music, and his mastery of the intricate vocal and instrumental styles, makes Irshad Khan one of the most dynamic musicians of today.

Whether he is performing pure classical, folk, or worldbeat/newage, audiences are stunned by his breathtaking virtuosity and profound musicality. Irshad Khan has performed 2000 concerts in 30 nations.

For Rumi Fest 2010, he will present some of his musical work revolving around Rumi's potery.

Born in Turkey, Garo Altinian has made Canada his home for more than forty years and currently resides in Toronto. Garo has been composing, singing and playing inspirational and devotional music for more than twenty years. His music has its roots in the Vedic and Sufi traditions as well as influences of western folk music.

Over the past decade Garo has been concentrating on the teachings and the writings of Mewlana Jalal’uddin Rumi. Inspired by the ageless wisdom of the great master he has turned a number of Rumi poems into music. Combining the instruments of the east and west his music produces unique, meditative, and contemplative tunes.

A collection of these songs has been presented at two annual concerts in Toronto. May 2009 at the Canadian Sufi Cultural Centre and May 2010 at the Don Heights Unitarian Congregation. Each year he participates in numerous spiritual and interfaith events in and around Toronto. His repertoire consists of original compositions sung in English and Turkish.

Agah began his music studies in 1997, under the scrutiny and careful guidance of master Ney'zen (ney player) Ilyas Celikoglu who is the last student to have studied under the discipline of the great poet and neyzen Tevfik in the late 40's.In 1999, Agah continued to pursue studying ney under the new auspices of the esteemed Hakan Alvan, a directing musician at the Turkish Ministry of Culture and Tourism. Between 1999 and 2002, Agah participated in a multitude of various Turkish classical chorus based concertos as works presented by the ministry as well as having played live in various professional music performaces as leading ney and clarinet.

In 2003, after migrating to Toronto in pursuit of an English education, Agah pioneered the initial footsteps of what is now known as the Bosphorus Project. Agah has since appeared in on stage with various Canadian and Turkish performing artists including recorded contributions and an apperance in the award winning documentary "Breath" and is now working on mastering the clarinet.

Art Exhibit by: The Open Easel

The Open Easel was founded by Toronto's visual artist, Samia Shaheen. Samia's work reflects the atmosphere and ambiance of the eastern cities she has lived in and visited. Oil, acrylic and water based media are used to capture the splendour of South Asia 's Mughal and Islamic architecture. In a play of lights, her paintings adhere to the style and tone of the romantic schools of impressionism and cubism, studied under the guidance of renowned South Asian artist Mansur Rahi Sahaab. Selected works have been exhibited in Islamabad , Lahore and Toronto and commissioned pieces have found their way into homes and offices across Ontario and Quebec.